The following article is the sole property of the Daily Journal of Commerce and was written by Chuck Slothower. To visit the DJC website and read the original article, go HERE.

The Portland Design Commission narrowly approved Oregon Square on Thursday after commissioners criticized the Lloyd District superblock design as unwelcoming to the public and inadequate to create a lively outdoor space.

The design passed 4-0, with two commissioners abstaining. Chairman David Wark had indicated he could not support the project, but after informally polling other commissioners, changed his vote to “aye.”

If the Design Commission rejected the design, commissioners faced the prospect of a potential reversal by the City Council on appeal. The commission’s approval means Oregon Square can move forward toward obtaining a building permit.

“I think that was a great decision,” said Ernest Rady, president and chief executive of American Assets Trust, the San Diego-based developer behind Oregon Square. “The alternative is eight old office buildings that you can’t be proud of.”

The design seemed to fall short for commissioners, who said the developer missed an opportunity to create a public space in the center of Oregon Square on par with Pioneer Courthouse Square or Director Park.

Oregon Square could add more than 1,000 multifamily units to Portland’s eastside. The developer’s investment for both phases could total $500 million to $600 million, with half of that spending coming in phase one, Rady said.

The superblock is bounded by Northeast Seventh and Ninth avenues and Holladay and Oregon streets. The project would be near the Lloyd Center and Oregon Convention Center in Portland’s fast-growing, close-in eastside.

Oregon Square was initially approved by the Design Commission in November 2015. But in May, American Assets Trust unveiled revised plans to break Oregon Square into two phases, necessitating a return trip through the city’s design review process. The developer cited concerns about bringing a large number of units to market all at once.

For American Assets Trust, a publicly traded company, the project comes on the heels of Hassalo on Eighth, which brought 657 multifamily units in three Lloyd District buildings. That project has stabilized, and is now 98 percent leased, said Kyle Andersen of GBD Architects.

“We’re definitely amidst a renaissance in the Lloyd District,” Andersen said.

Design commissioners were sharply critical of American Assets Trust’s plans for Oregon Square’s central plaza. The developer’s revised proposal eliminated plans for a large water feature in the plaza, and proposed installing public art off to one side instead of making it a central element.

The project will return for a type II design review before Bureau of Development Services staff, led by planner Staci Monroe. Conditions include installing art during the first phase, softening a corner of one building and building ground-floor “live-work” units facing the plaza to commercial standards.

Wark unsuccessfully pushed for punching a narrow road or lane through the project from Northeast Seventh to Northeast Ninth avenues. He said an east-west lane would help “activate” the square at the center of the project.

“What a lane or street does more than anything, I think, it communicates the impression that it’s public,” Wark said. “I don’t know if this does. It becomes a compound, a cloistered element. Also, what’s the draw?”

Andersen protested that building a road through the site would require dramatic design modifications and could prove unworkable.

Rady, who had sat silently through most of the three-hour hearing, pleaded with commissioners to give American Assets Trust the flexibility to design an economically viable project.

American Assets Trust has a market capitalization of $1.85 billion, and investments from major players such as Vanguard. The development team appeared frustrated by the commission’s design criticisms. Before the final vote in favor, the developers were whispering in the audience about appealing to City Council.

At one point, Rady said the development team would do its best to make the plaza an active, attractive public space. Wark replied, “Before you get your building permit, we’re going to help you do that.”

Savinar warned in the future that the Design Commission must do a better job upon initial review of superblock projects.

“These superblock projects are always problematic because there is so much to get your arms around,” he said. “We have to be really careful on the first go-round. We have to really be tough first out of the box.”

Vallaster said he could not enthusiastically support the project. “The project has some strengths, and it has some weaknesses,” he said.

Rady sought to reassure commissioners that the project would be a plus for East Portland. “It’s going to be something that you’ll be proud of,” he said. 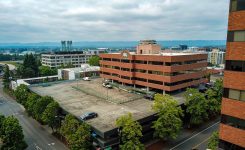 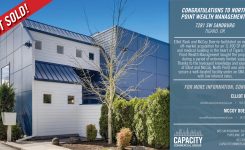 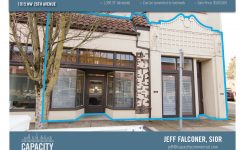 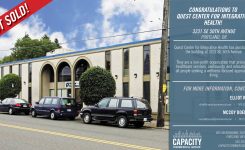